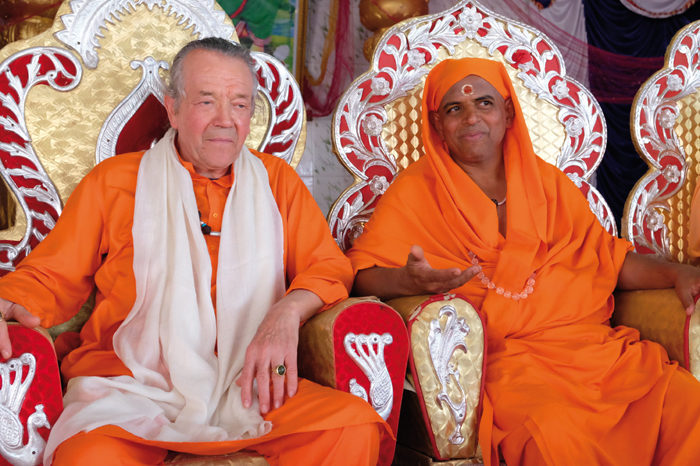 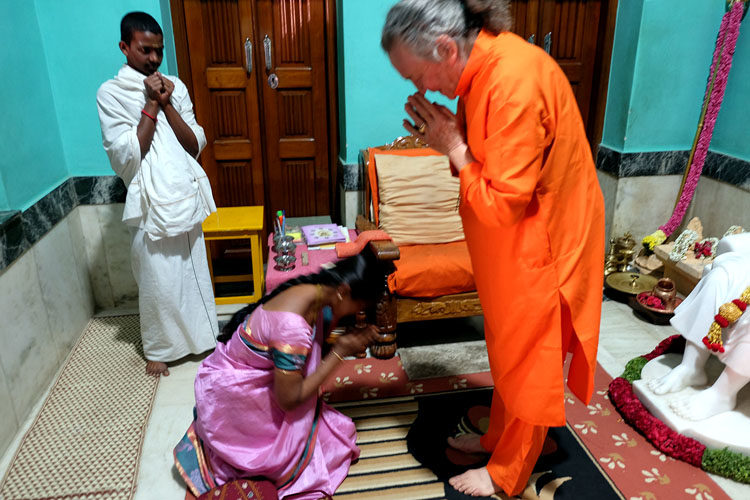 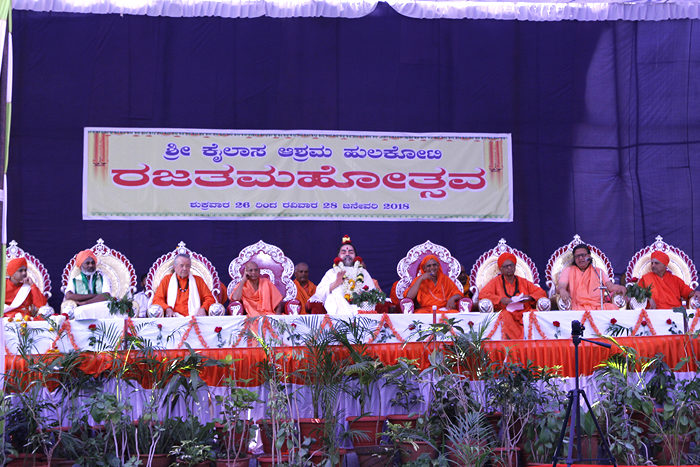 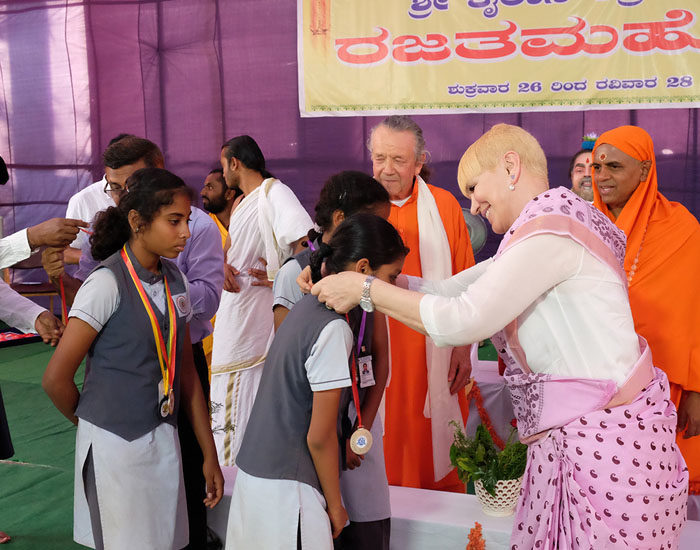 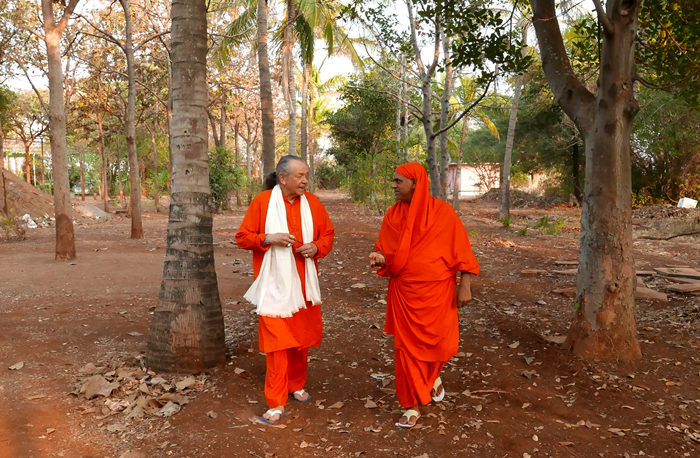 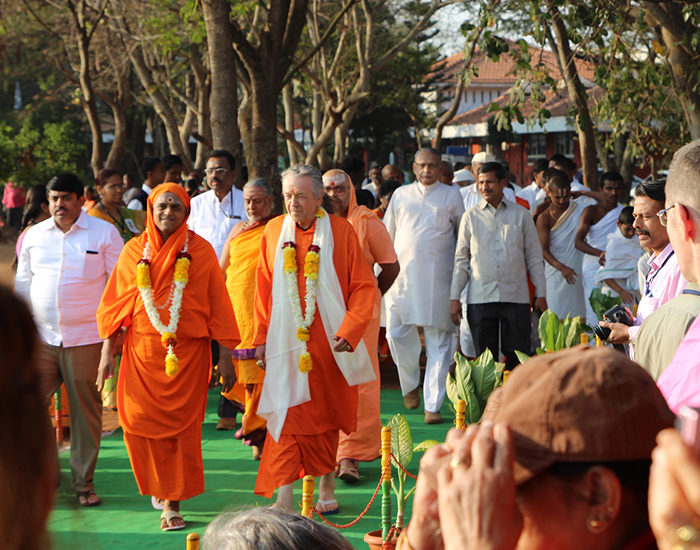 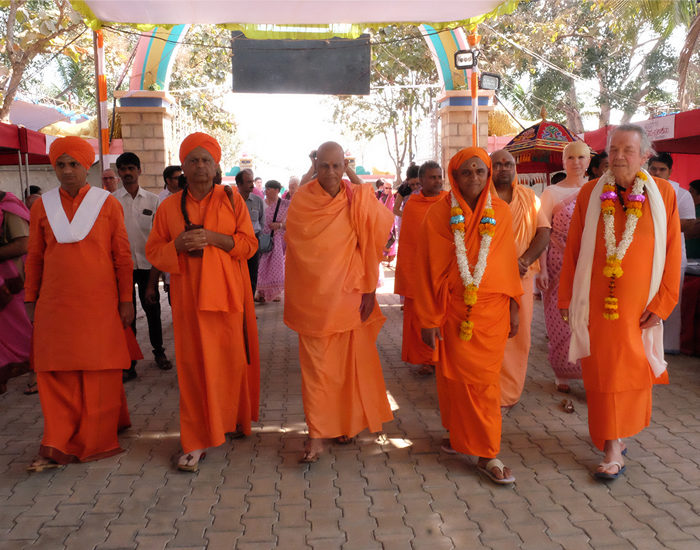 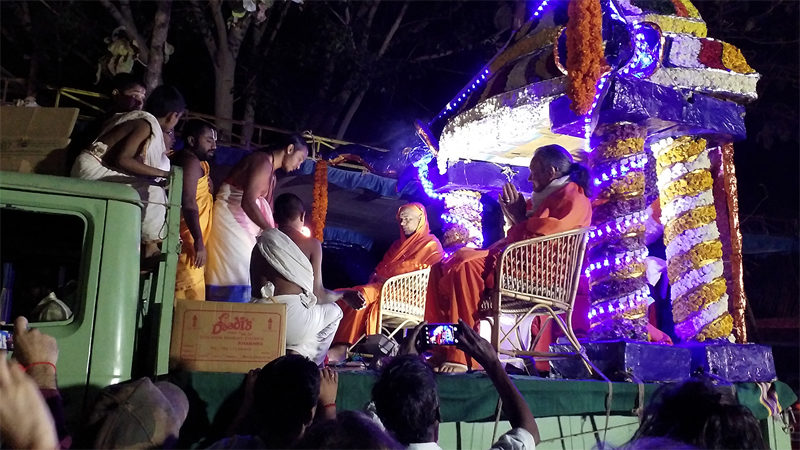 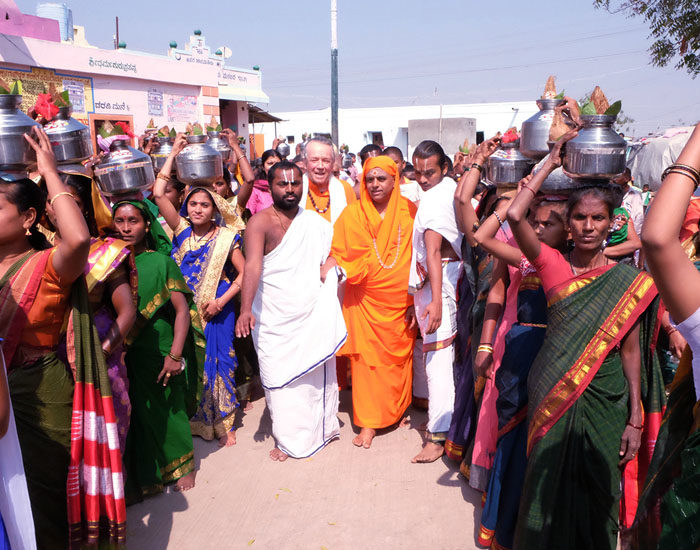 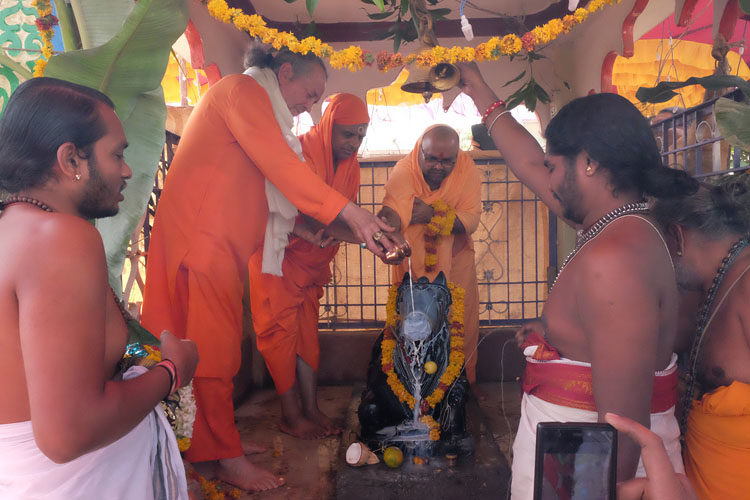 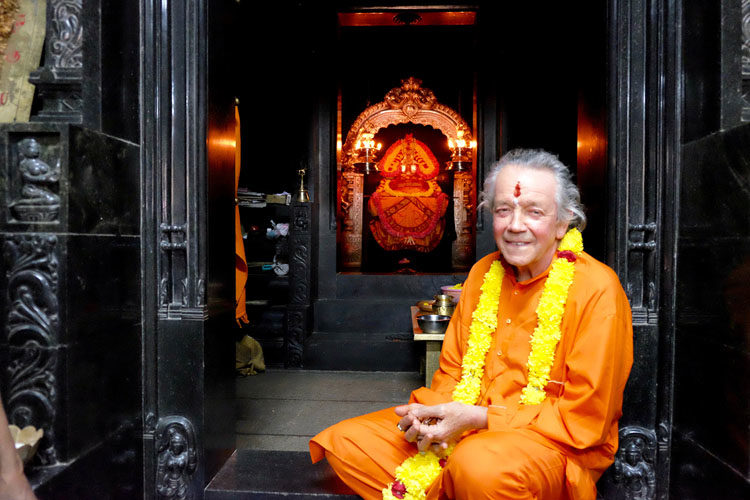 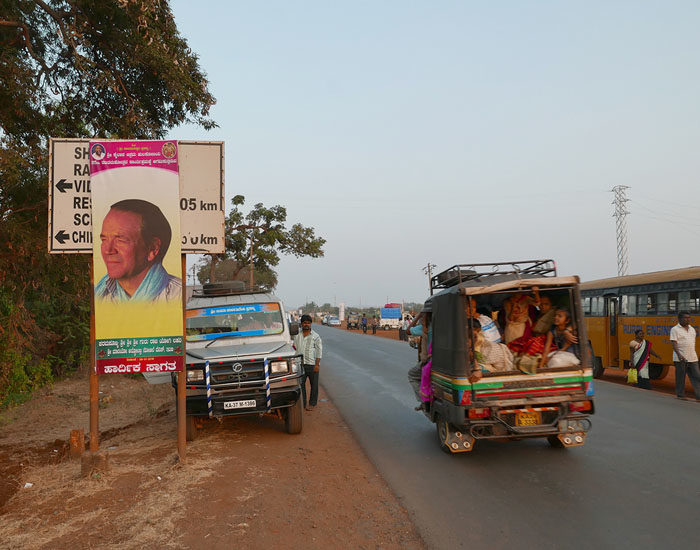 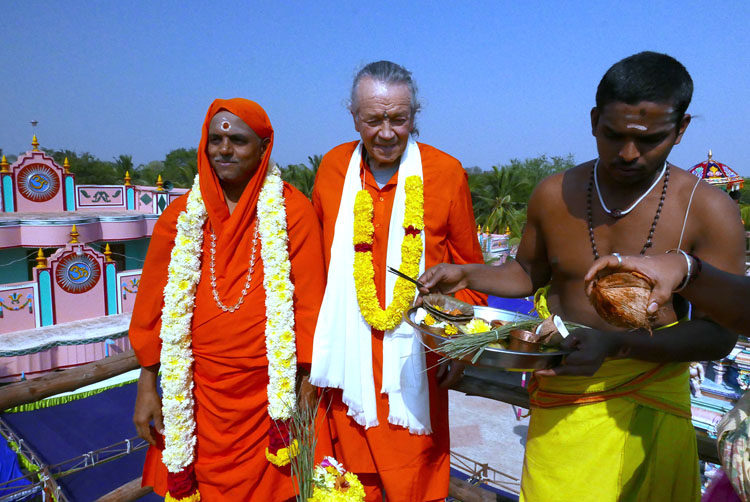 This is his speech at the celebrations:

First of all, I would like to thank Jayendra Swamiji for the invitation and for the opportunity to get to know the people and the traditions of India, as well as all the holy people who accompanied us with their love and wisdom during these dream-like days.
Uma, a devotee who is also here today, once asked me: “What did Tiruchi Swamigal tell you? What lesson did he give you?” I must admit that I did not have the courage to tell her the whole truth, but just part of it. Now I’d like to tell you what really happened. When we met for the first time, he said to me: “You must build a Kailash in Italy”. I looked him in the eyes and asked myself: “What is he talking about?” After that, he asked Jayendra Swamiji to give me a statue of Sri Rajarajeshwari. He gave me a mantra and a yantra, and urged me to perform a puja everyday for the Holy Mother. He kept us there with all the love and affection a mother can give.
Two days after that we came home with a statue and some “homework” to do. So we rolled up our sleeves and got to work. I placed the statue of the Holy Mother on a Dhuni where the sacred fire has been burning since 1989 when I made a “life vow” to be free from accidents.
Along with some devotees, the chosen ones, we built a Kailash. However, during my meetings with Sri Tiruchi he always asked me. “How is the Holy Mother doing?” “She’s doing well”, I answered without really understanding.
One morning I was performing my daily puja when I realized that the statue had turned to gold! I was speechless. So, I decided to take it to a goldsmith, a friend of mine, telling him it was a present without adding anything else. He carried out a thorough analysis of it, he drilled a borehole and, after some days, he gave it back to me saying it was a pure gold gift. After several days, the Holy Mother appeared to me during meditation and said: “Why did you doubt me?” I started crying and since then I never had doubts again, even when the strangest things happened, like healings and all the rest that you know and understand better than me because, with the blessings of Sri Tiruchi, it happens everyday around me.
A few words about human beings. It is difficult to believe that in the 21st century men are still killing each other, but this is the sad truth. The ego wins over love. Self-interest and personal agendas are still human prerogatives. We are always unsatisfied and fill our emptiness from the outside instead of looking into our hearts and asking: “Am I really this? If I feel an inner strength, why don’t I listen to it? Why do we follow the crowd influenced by political or religious movements?”
Love is something we have to live and experience. Everybody is talking about love, but that is not love. If it were true love and affection, how would  a mother let her son go to war, see him killed or killed another mother’s son?
In this century women are the ones who have to change the word Love to become Beings of Light. Consequently the holy people who have spent their life talking about Love will not have lost their time. Above all, Sri Tiruchi’s messages to humanity will be continued by Jayendra Swamiji. During the Congress for Peace in Noale (Italy), Sri Tiruchi Swamigal and many other holy people gave and are still giving messages of Love and Peace. But where are the human beings? Maybe they have lost themselves in the labyrinth of the mind forgetting the heart. I hope the Goddess Kali, after severing our heads, puts the heart in its place! I hope she can do it quickly, very quickly. Mankind is in great danger.
I have a dream that I believe in. My dream is to give Love and the ability to amaze and fill people with enthusiasm. This is why I travel from one country to another: to bring Love!
Maybe we are not aware of it, but there is a seed of true and unconditional Love within us.
Sometimes I cry because the seed dies. I feel sorrow and disappointment when I see hate around me and I get discouraged. But slowly I rise again. I still have many treasures to deliver. Love can be everywhere. I just have to let the heart vibrate like a string. I am doing my best and I will always do so. I promised this to Sri Tiruchi and to Mother Nature. Even if some seeds are dead, I will work for all the seeds that will never die.
I can forget God but I could never forget Sri Tiruchi. He changed my life and everyone’s life with just one word. In India you say “Gurukripa Kevala” which means “The whole Universe is my Guru”. I say “Tiruchi Swamigal is my Guru beyond the Universe”. How could I have even known the universe without his blessings? For this reason, I thank him.
I thank my “big brother” Jayendra Swamiji for his kindness, his teachings and for the Love he has been giving me and all of us. A very special thanks to the people who are helping Swamiji build these Ashrams, true paradises in the world. I would also like to thank the people of Hulkoti for the collaboration and the sense of belonging we all feel. I hope, indeed I’m sure, that we will go home with our luggage full of Consciousness, Love and the strength to follow our pathes.
Hari Om
Marioji