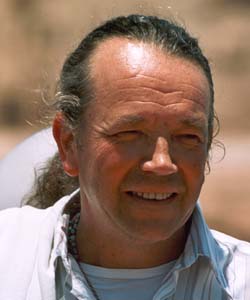 Mario Attombri, mystic, man of Peace, extraordinary figure of a yoga Master, as well as one who has realized the highest level of Consciousness (Samadhi).
He witnesses this with his very being, with his words and thoughts.
Anyone approaching with a sincere heart will be able to get a new and broader understanding of the Reality of Life.
Born in Noale in November 19, 1947. Since his childhood he showed his active, eclectic, original-minded and creative Spirit.
His passion for nature led him to spend a lot of time in it, so to be able to directly learn The Ancient Wisdom.
While still a boy he was initiated into the yogic Spiritual Path by His Master, a Sufi, and with him he started travelling on Earth’s various paths: through the plateaus of Anatolia up to reach Konia, the heart of the brotherhood of the whirling dervishes, experiencing the Sacred Ecstasy in their Sacred dance “Semâ”.
Together with his Master he lived the reality of Islamic Mysticism, Prayers, Dikhr (remembrance of God) in other various continents and countries: Kurdistan, Afghanistan, India, Iran, Turkey, Egypt, etc..

He met ascetics, mystics, monks, shamans, healers, Self-realized Guides, re-linking the Initiates’ living spiritual chain (silsila). He met also great Yogis  creating a real system of Life based on ancient disciplines: a real way of Being, not only “a spiritual appearance”, but a direct pathway to the knowledge of the  “Spirit of the Creator”.
He himself became – not by choice, but rather for “Election” – A Yogi, a Teacher, a Guru with the name of Sri Guru Raja Yogi Lahari.
Then, once again, standing out from all the others by remaining, above all, a man, an husband, a father that works and lives in the midst of us all.
In 2005 he was awarded the title of Swami, which means someone that renounces of the ego for just Living in the Divine Self with the name of “Sri Yogananda Puri Swamiji “. Even after that he did not retire in an ashram but kept on staying “in the world”.
He is Free from ideologies, religions, from teachers, gurus and he encourages people to Be Free, because only in the Full Freedom  men can realize their Inner Selves, out of the perverse mechanism of mind – the ego – that keeps them in a  cage.

It is not possible to describe or to tell about Marioji without mentioning some aspects of his mysticism. His “Being Love – giving Love” manifests in the acceptance of everyone, in the compassion, in the dedication and in the deep understanding of the ones who are ill or seek for knowledge.
Patience to accept anyone listening while taking care, leaving space for the silence as Knowledge can only be transmitted from soul to soul and not by words.
He is not just a mystic: Marioji is a mystagogue: a person who made the Experience of God and accompanies people on the Sacred Path. He indicates the way to follow not by mere words, but with his own Experience of Life.